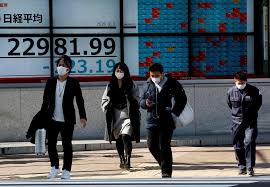 World stocks markets were knocked off record highs on Tuesday as two of the world’s mega companies reported damage from the coronavirus outbreak.

Apple’s stock fell almost 6% in Frankfurt and all Europe’s main markets fell after the iPhone maker warned it was unlikely to meet the March quarter sales guidance it had set just three weeks ago.

HSBC announced a massive restructuring that involved shedding $100 billion of assets and slashing 35,000 jobs over three years. It also warned about the impact of the coronavirus on its Asia business. The stock fell more than 2% in Hong Kong trade.

“We have been pointing out that the market reaction in past weeks was excessively constructive and this could be a wake-up call to all investors that ignored so far potential negative impact,” analysts at UniCredit said.

The warning from Apple sobered investors who had hoped stimulus from China and other countries would protect the global economy from the effects of the epidemic.

Bonds were in demand, with the 10-year U.S. Treasuries yield falling 4 basis point to just above 1.5%. Safe-haven gold rose to its highest in two weeks and oil prices fell nearly 2% after five days of gains.