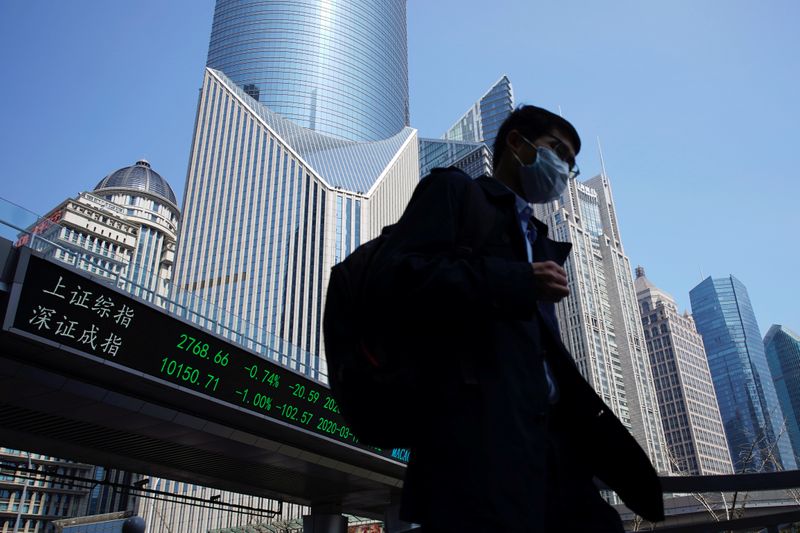 Asian shares stumbled on Monday and oil prices slipped as fears of a second wave of coronavirus infections in Beijing sent investors scurrying for safe-havens while underwhelming data from China further weighed on sentiment.

MSCI’s broadest index of Asia-Pacific shares outside Japan was down 0.3% with Australian shares off 0.1% and South Korea easing 0.3%. Japan’s Nikkei faltered 0.7%.

Chinese shares opened in the red with the blue-chip CSI300 index down 0.1%.

Monday’s losses follow a strong rally in global equities since late March, fuelled by the central bank and fiscal stimulus and optimism as countries gradually lifted restrictions put in place to curb the spread of the novel coronavirus.

The lead from Wall Street was also dour with e-minis for the S&P500 sinking 1.1% in early Asian trading.

Risk sentiment took a knock after Beijing recorded dozens of new COVID-19 cases in recent days, all linked to a major wholesale food market. Authorities have closed the center and locked down nearby housing districts.

Investors are also fretting over a spike in cases in the United States where more than 25,000 new cases were reported on Saturday.

Worldwide coronavirus cases have crossed 7.86 million with 430,501​ deaths, according to a Reuters tally.

Economic data from China did little to revive risk appetite.

China’s industrial output rose 4.4% in May from a year ago when analysts had forecast a gain of 5.0% while retail sales fell a larger-than-expected 2.8% in a sign of weak domestic demand.

The Chinese yuan extended losses in offshore trade after the data to be last at 7.0883 per dollar.

Some analysts were still hopeful of a revival in sentiment.

Elsewhere, the safe-haven Japanese yen rose on the greenback to 107.18 yen.

Federal Reserve Chairman Jerome Powell is also due to testify before Congress where “he may try to spin a more upbeat/hopeful outlook – but whether markets listen remains to be seen,” said Betashares chief economist David Bassanese.

Also of interest is U.S. May retail sales figures on Tuesday, which are expected to bounce smartly after a slump in April.

Oil investors await OPEC+ committee meetings of experts later this week who will advise the producer group and its allies on output cuts.