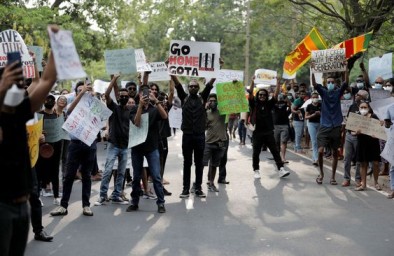 In April, the National Consumer Price Index increased by 33.8 percent over the previous year, more than six times the 5.5 percent inflation rate.

The Department of Census and Statistics recently released data showing that annual food inflation was 45.1 percent.

The country’s 22 million inhabitants have been suffering from extreme shortages of essentials, such as food and medicine, for months as a result of a foreign exchange crisis.

Protests outside President Gotabaya Rajapaksa’s office have continued, calling for his resignation in the face of a severe economic crisis.
Fuel price hikes of 35 percent for gasoline and 65 percent for diesel — extensively used in public transportation — are expected to drive up inflation in May.

Petrol is in short supply, with large lines forming outside the few remaining pumping stations.

Last month, Sri Lanka requested emergency help from the International Monetary Fund. The country has defaulted on its $51 billion external debt and is looking for international assistance to help it recover.

Since the outbreak of the coronavirus epidemic, the economy has collapsed, with tourism income and remittances from overseas workers plummeting.