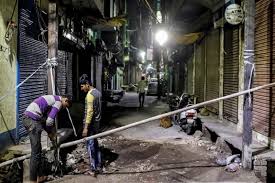 For years, Hindus and Muslims lived and worked peacefully together in Yamuna Vihar, a densely populated Delhi district.

But the riots that raged through the district last month appear to have cleaved lasting divisions in the community, reflecting a nationwide trend as tensions over the Hindu nationalist agenda of Prime Minister Narendra Modi boil over.

Many Hindus in Yamuna Vihar, a sprawl of residential blocks and shops dotted with mosques and Hindu temples, and in other riot-hit districts of northeast Delhi, say they are boycotting merchants and refusing to hire workers from the Muslim community. Muslims say they are scrambling to find jobs at a time when the coronavirus pandemic has heightened pressure on India’s economy.

The trigger for the riots, the worst sectarian violence in the Indian capital in decades, was a citizenship law introduced last year that critics say marginalises India’s Muslim minority. Police records show at least 53 people, mostly Muslims, were killed and more than 200 were injured.

Dhingra said the unrest had forever changed Yamuna Vihar. Gutted homes with broken doors can be seen across the neighbourhood; electricity cables melted in the fires dangle dangerously above alleys strewn with stones and bricks used as makeshift weapons in the riots.

Mohammed Taslim, a Muslim who operated a business selling shoes from a shop owned by a Hindu in Bhajanpura, one of the neighbourhoods affected by the riots, said his inventory was destroyed by a Hindu mob.

Many Muslims said the attack had been instigated by hardline Hindus to counter protests involving tens of thousands of people across India against the new citizenship law.

Emboldened by Modi’s landslide electoral victory in 2014, hardline groups began pursuing a Hindu-first agenda that has come at the expense of the country’s Muslim minority.

Vigilantes have attacked and killed a number of Muslims involved in transporting cows, which are seen as holy animals by Hindus, to slaughterhouses in recent years. The government has also adopted a tough stance with regard to Pakistan, and in August withdrew semi-autonomous privileges for Jammu and Kashmir, India’s only Muslim-majority state.