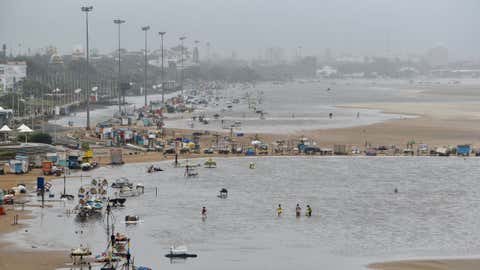 At least three people were killed in Tamil Nadu and over 1,000 trees uprooted while some low-lying areas were marooned due to waterlogging following heavy rains on Thursday as severe cyclonic storm Nivar made landfall near Puducherry.

In Tamil Nadu, atleast three people were killed in rain-related incidents across the state such as tree and wall collapses, authorities told PTI. Officials estimate around 1,086 trees were uprooted and almost all of them have been removed.

Tamil Nadu Chief Minister Palaniswami visited Cuddalore, close to Puducherry, and took stock of the damage in the district. He inspected plantain crops damaged by the cyclone in the district and reviewed the situation along with senior state officials including Chief Secretary K Shanmugam.

Later, he told reporters that due to adequate precuationary measures taken by the government, there has been no major damage caused by Cyclone Nivar.

Puducherry CM V Narayanasamy said there were no reports of loss of lives adding whether boats and nets were damaged or not would be known only later.

Meanwhile, Union Home Minister Amit Shah on Thursday tweeted that he spoke to the Chief Ministers of Tamil Nadu and Puducherry and assured them of all possible help in the wake of severe cyclonic storm Nivar.

Cyclone Nivar had developed into a ‘very severe cyclonic storm’ when it made landfall late Wednesday night near Puducherry.

Subsequently, it weakened into a cyclonic storm and further into a deep depression. It laid centered about 50 km west-southwest of Tirupati at 2.30 pm, the India Meteorological Department (IMD) officials said.