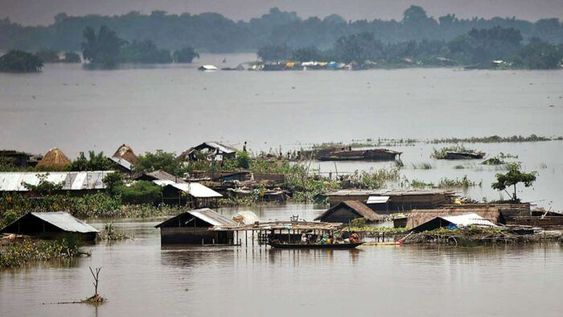 Union Home Minister Amit Shah spoke with Chief Minister Himanta Biswa Sarma over the phone on Tuesday about the overall flood situation in Assam and promised him that the Centre will provide all feasible assistance.

In separate English and Assamese tweets, the Home Minister stated: “Concerned about the situation in the wake of heavy rainfall in parts of Assam. Spoke to CM Himanta Biswa Sarma to take stock of the situation. NDRF teams are already been deployed. Assured all possible help from the central government.”

Both the Arizona Battalion of Assam Rifles and Army forces rescued approximately 500 locals. He claimed that rescue attempts continued till late in the evening, adding that the Deputy Commissioner and villagers appreciated the Army and Assam Rifles’ assistance.

Around one lakh people were affected by the pre-monsoon flood in the Cachar district alone, including 24,965 children and 32,827 women.

With one more death in the Udalguri district, the death toll in Assam’s ongoing pre-monsoon floods and landslides has risen to eight, affecting almost four lakh people in 26 districts.

One person died in the previous 24 hours in western Assam’s Udalguri district, according to officials with the Assam State Disaster Management Authority (ASDMA), while seven people perished earlier in the Dima Hasao and Lakhimpur districts due to floods and landslides.